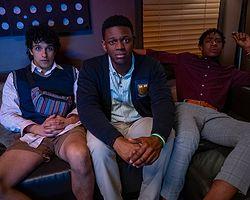 Though Sean is pretty excited and has laid out an itinerary for every party they’ll hit, Kunle is mostly concerned about completing his mold lab assignment, which detects his acceptance into Princeton.

Upon returning to their apartments to re-group, they find that their roommate Carlos (Sebastian Chacon) has left the door unlocked. Kunle and Sean find a white half-conscious girl on their living room floor and an unaware Carlos, who didn’t hear her over his loud videogame blare.

Kunle proposes calling the police, but Sean strongly opposes quoting it may not end well for them given that they are two black dudes, one Latino guy and a passed out white girl.

The three guys load the white girl Emma (Maddie Nichols) into Sean's car, intending to recuperate her. Emma's sister Maddy (Sabrina Carpenter) realizes that Emma is missing from the party they were at and begins to panickily search for her.

The plot unfolds into a chaotic, hilarious and tension-packed pursuit as Kunle, Sean and Carlos tackle their differences while striving to revive Emma.

Prime Video phrases, "What would you do in an Emergency?!" The indie film tackles racial disparities and unbreakable friendships, among other hot college topics.

Be sure to catch the drama on Prime Video on Friday, May 27.