The three films are now available on HBO Max, premiering on June 1, which is incredible news for the slasher subgenre horror fans.

The plot is simple, a group of four teens take a driving trip that ends up in a hit and run or rather a hit and throw body in the ocean situation. They then make a pact not to reveal what they did to a single soul. But a year later, the heinous secret comes to bite them in the behind, or is it slash them to death?! 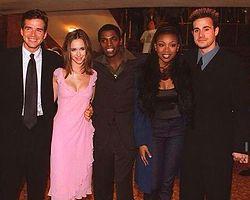 The third instalment didn't have any of the cast recurring in their roles, making it a stand-alone sequel. It features Torrey DeVitto as Zoe, David Paetkau as Colby Patterson, Ben Easter as Lance, Brooke Nevin as Amber Williams, Don Shanks as The Fisherman, and K.C. Clyde as Deputy Hafner, Seth Packard as Roger and Michael Flynn as Sheriff Davis.

I Know What You Did Last Summer and its sequels are the kinds of films you watch on a boring day or simply for the body count. Still, it doesn't hurt to check them out tonight.