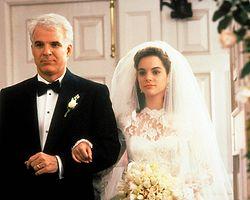 I have to admit, as a 90s kid, I die a little inside whenever I see movies I grew up watching being rebooted like quite recently Disney's Cheaper by the Dozen starring Zach Braff alongside Gabrielle Union and now Father of the Bride.

I worshipped the 1991 version of Father of the Bride starring Steve Martin and its 1995 sequel. So, finding out that Warner Bros. has released an official trailer of the film’s modern-day re-adaptation, it feels like my childhood is being stripped away.

Anyway, it's good to have something for the new generation to revere. Watch the new Father of the Bride official trailer by Warner Bros. Pictures below:

With a slightly similar storyline to the previous version, this remake features a father who must come to grips with his daughter’s upcoming nuptials as he navigates several relationships within his flailing Cuban American family.

Save the date June 16 when the romance comedy film premieres in the United States via HBO Max and by Warner Bros. Pictures in the countries with no access to the streamer.