The highly-rated Nat Geo TV series Something Bit Me! debuts on Disney+, giving you the chance to stream the previously aired 11 episodes.

Like the title implies, Something Bit Me! follows real stories of dangerous wild animal and insect attacks that caused near-death experiences to their victims. 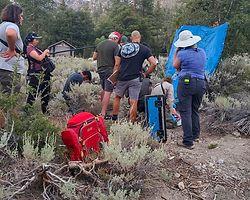 The first episode: This is Not a Deer! explores a Costa Rica trip gone wrong when a scout encounters a jungle inhabitant. Expect to see some cute but incredibly dangerous polar bears in the 2nd episode: We Were Being Hunted. The scary slithery snake dominates the third episode: It Smelled of Death.

The logline for Episode 4: I was Just Like a Ragdoll says Serenity turns into a savage fight for survival. Episode 5: Where's mom? – Two vastly different creatures, two shocked humans. Episode 6: I have to See Her- When humans collide with a creature, pain can ensue.

Episode 7: Lord I’ll See you in a Minute- Two boys heroically fight for their lives. Episode 8: No Time to be Terrified- On two continents, happy couples enjoying nature. Episode 9: If She Smells I’m Alive- At half of a ton or four pounds, two predators pack a punch.

Episode 10: Get Back into the Kayak- Unlikely danger comes from a fish out of water. Episode 11: Everything Went Dark- Animals pounce when humans invade their territory. Episode 12: I Went Bonkers- In Florida, the animal kingdom bites back and ordinary citizens step in to save lives, debuts on Sunday, May 15.

If you love animal documentaries, you'll definitely enjoy every 45-minute episode of this series. And who doesn't love animal docuseries? Something Bit Me! boasts incredible ratings, including 91% on IMDb and an audience likeability of 93%.